Being a valuable accompanist requires you to play a complementary role to the player or singer you are accompanying.  One of the ways to do that is by offering a different timbre or sound quality from the main parts.  This is especially important when accompanying another guitar, as is often the case when playing with a singer/songwriter.  These performers and those who sing similar cover songs frequently play guitar as well.  The tendency for acoustic guitar players is to strum chords or finger pick in first position where the open strings provide a fullness to the sound.  In these situations it is logical to provide the accompaniment using both the higher pitched notes and the differing timbres that are produced higher up the guitar neck.  Therefore, it is extremely important that you feel comfortable in any key at any position on the neck of the guitar.

When the singer puts the capo on the fourth fret and plays what looks like G, C and D chords, are you comfortable playing in the key of  B at the 7th fret or at the 11th fret?  Perhaps in that case you might even choose to play below the chords, playing in the key of B starting at the first fret.

The beauty of the guitar neck is the way it is connected from open strings to the twelfth fret where it starts all over again.  There are repeated patterns and repeated relationships between notes, chords, scales and keys that allow you to play both chords and lines over chord changes in any key at virtually any position on the neck.

You really need to learn the chord relationships and notes in five major and minor keys in open position, C, A, G, E and D.  The relationships in these five keys can then cycle in that exact order up the neck.

Let’s look at what I mean.  Here are the five chord forms I listed in open position.  I have presented these as if you were sitting across from me looking at where my fingers are on the fretboard. 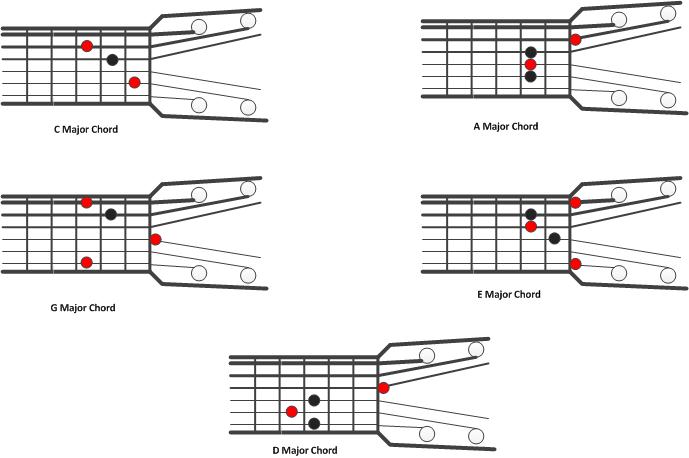 I suspect that none of this is particularly new or exciting, just the basic chords you learned on the first or second day you started to played guitar.  However, focus on the shapes of the chords rather than what chord they are.  In the diagrams, the red finger position indicates where the root note of the chord occurs.  When the red position is behind the nut, it means that the open string is a root tone.

Now, let’s look at how these chord shapes relate to one another as we go up the neck.  Here is a C Major chord played at five different places on the fretboard.  The green lines in this diagram indicate where a barre with the first finger is used.  The barre, of course, takes the place of the nut as you move away from open position.

This chain of chord shapes is always the same.  An ‘A shape’ is always followed by the ‘G shape’ and always preceded by the ‘C shape.’  If you know where to play a chord using one of these shapes, you can figure out where to play that chord anywhere else on the neck. More importantly, if you can locate the root note of the chord you want on any string, you will know how to form at least two versions of that chord.  Each root tone is a part of two chord shapes.

Let’s look at the A major chord and how that can be played at any position on the neck.

The sequence of shapes is the same, G shape follows A shape, E shape follows G shape, etc.  Once you reach the 12th fret, the pattern repeats.

Now this is not news to some people.  They have figured this out or they have learned it from someone else.  But, I am always surprised by the number of players who can play the same chord in different places, but haven’t seen the repeated pattern.  This one bit of understanding connects the fretboard and helps you to move fluidly from one position to another in search of the right notes and the right timbre to add the perfect accompaniment.

Let me know if you have thoughts to add or questions to ask.